You are here: Home / Noodles and Rice / Pancit Habhab

Pancit habhab is one of the popular stir fried noodles that originated in Lucban, Quezon province. It is very similar to pancit canton but the only difference is the noodles used which is the Lucban miki. Obviously you can only buy Lucban miki in Quezon province. I think the name of this pancit is not derived from the kind of cooking or the ingredients used but how it is eaten. It is eaten without utensils, just a small piece of banana leaf and eating it by putting it directly in your mouth. This is the old fashion way of vendors selling this noodles in the past instead of the modern styrofoam or small plastic bags which are bad for the environment. There are varieties of using garnishing on pancit habhab. You can add peeled shrimps, chicharo and cabbage but the recipe here is just using pork belly, pork liver and some veggies which is cheaper specially if you intend to sell it. 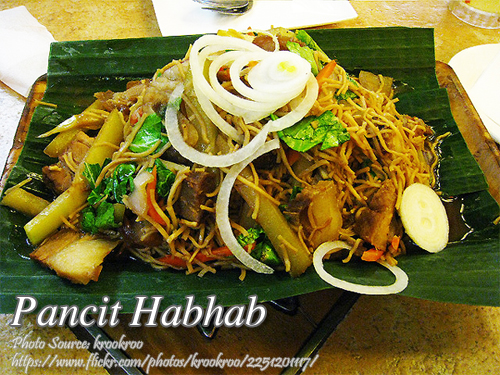 How to Cook Pancit Habhab

How to cook Pancit habhab: