You are here: Home / Noodles and Rice / Lomi Batangas

A Batangas version of your favorite lomi where there are no veggies or if there is any, it is only used as garnishing. This is a version lomi created for meat lovers where the most of the ingredients aside from the miki noodles are pork meat, pork liver, pork rind or chicharon, kikiam and fried pork belly for garnishing. But some of these dishes vary in their garnishing like adding squid balls or fish balls on top of the kikiam. I also notice the use of the thickening agent where some use cornstarch and others use cassava starch. But if you want your lomi to have a clear soup (of course the color would be brown because of the soy sauce), use sweet potato starch just like the one used in making maki mi. 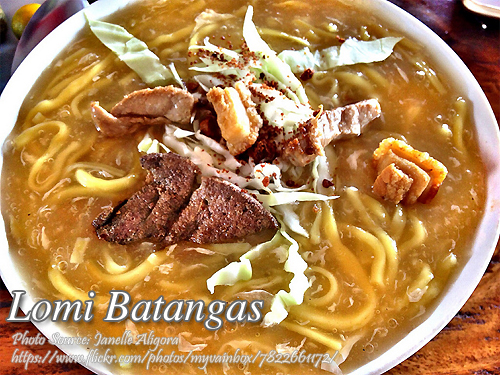 How to Cook Lomi Batangas

How to cook Lomi Batangas:

Watch the Video on How to Cook Lomi Batangas: