I think there is no doubt how Mang Inasal has became a phenomenal success with regard to serving chicken inasal. It has captured the taste and hearts of Pinoys when is comes to grilled chicken. Come to think of it there are many restaurants that are serving chicken inasal and one of the well known before Mang Inasal was born was Bacolod chicken inasal. Well I guess its not only the taste but the marketing strategies was the main driving force of Mang Inasal’s success. The recipe I have here was not exactly their recipe but only a copy cat. It might not taste exactly as the real thing but at least it might resemble on some other aspect. The only thing I notice is their chicken inasal is sweeter than the traditional chicken inasal. And I think it is a hybrid of chicken barbecue and chicken inasal which you might notice on the ingredients below which contains sugar and soy sauce. The traditional chicken inasal is just vinegar, lime, herbs and spices. 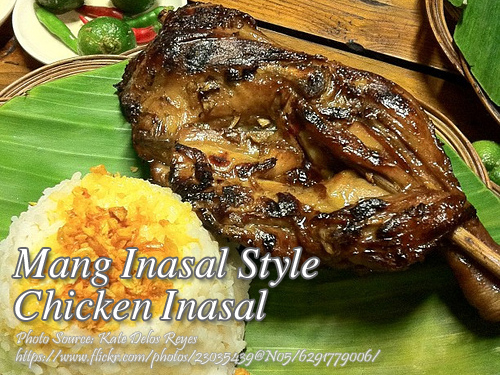 Ingredients for the marinade:

For the dipping sauce: