Here is a chicken gizzard recipe stir fried in oyster sauce. This recipe is not the usual chicken liver and gizzard with adobo style cooking. And it doesn’t include chicken liver but purely gizzards. This can be serve as a viand or in a sizzling plate as pulutan.

There is an extra step in preparing the chicken gizzard specially if you bought it in the wet market. Usually it is attached with the chicken liver and with some fat on it. But since you only need the gizzards, ask the vendor to give you the gizzards only as much as possible. (In the supermarkets you can buy gizzards only and already cleaned.) So after you brought it home prepare it by slicing it and removing the contents. There is a yellowish skin on the gizzard which you have to remove. Use a knife by scraping it then rub it in sea salt to remove the mucus and odor. Then boil it with crush garlic and ginger for half an hour. Discard the water then cool. 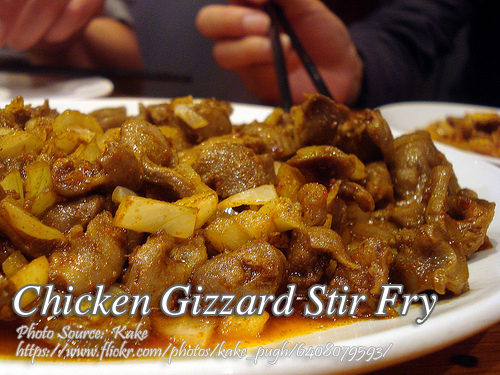