Salmon head siningang is one of the many versions of fish siningang that has become the favorite of Pinoys. But you can cook this dish occasionally and will depend on the availability of this kind of fish. It’s because salmon is not indigenous in the Philippines.

These are imported fish and since the head part is not usually eaten in countries where they came from, they are exported to Asian countries like us. Salmon head is best cooked in soup like sinigang because it mostly consists of cartilages, skin and soft tissues specially on the eye sockets and of course the brain. On the only meaty part is the cheeks and the portion of the nape. This sour soup is using kamais (bilimbi fruit) as the souring agent unlike the usual tamarind. Which I think is better because this fruit eliminates the very fishy taste and odor of the salmon head. 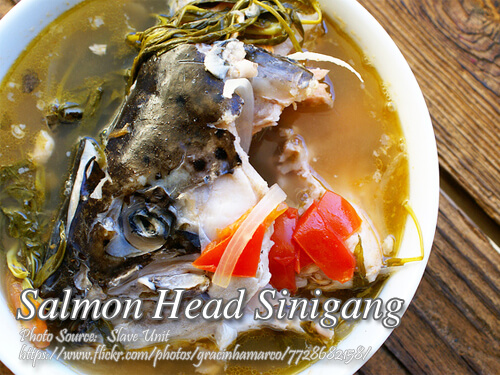 How to cook Salmon Head Sinigang