Rellenong bangus is one of the most popular dish in the Philippines. On top of the delicious taste and unique process of preparation compared to other fish recipes, the amount of work involve is tedious. Separating the skin from the meat and deboning and flaking of the milkfish meat requires a lot of patience. But after all the hard work of deboning, marinating the skin, cooking the meat with all the ingredients, stuffing the skin with the fish meat mixture and frying is the reward of eating a unique and delicious Filipino dish.

By the way, the preparation of removing the meat from the skin can be done in two ways: one method is cutting the back of the fish and scraping it’s meat and bones from the skin, then sewing it up with a thread and needle after stuffing it of course, the other one is braking nape and tail of the fish and using a palette knife or the handle of the aluminum ladle to remove the meat without breaking or cutting the skin just like the recipe I have below. Then squeeze out the fish meat from the skin beginning from the tail and afterwards you can remove the fish bones after boiling the fish meat (see video on the bottom the actual process).

The second method requires a good skill in scraping the meat. But I guess practice makes perfect. Also, there are many kinds of kitchen ladle nowadays. What we need is the old typical aluminum “sandok” with a straight handle end and a hole for hanging it on a wall. But you can easily use a pallete knife or frosting spatula. 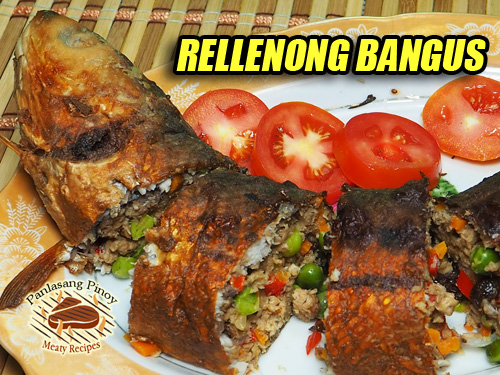 How To Cook Rellenong Bangus

How To Cook Rellenong Bangus