Kinalas is famous noodle dish in Naga city. It is very similar to beef mami and the only thing you will notice on their difference is the addition of thick brown sauce on top of the noodles similar to a gravy. If you haven’t heard of this dish, you might wonder why it is called “kinalas” because it doesn’t sound like a noodle dish. When I first known this dish, I thought it was the dialect thinking “kinalas” is equivalent to beef mami or bulalo mami. But my assumption is wrong because that word means to scrape or remove the meat from the bones. Which is the method of cooking this dish. The traditional way of making this is using cow’s head and boiling it until the meat almost separate from the bones. Then the meat and tendons are removed from the bones and chop it to bite size pieces and used as a garnish. The cow brains is also included in the dish. It is used to thickened the sauce. But in the recipe below, we only used flour to thicken the sauce. 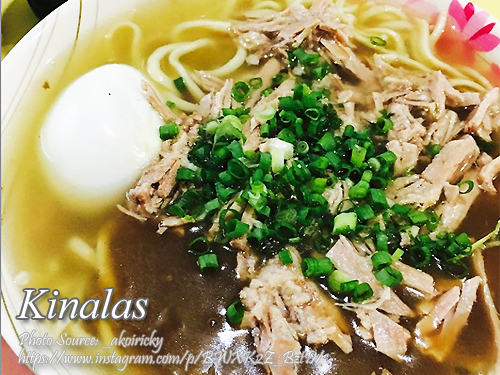 To make the kinalas sauce: