You are here: Home / Chicken Recipes / Chicken a la King

Chicken a la king is a delicious yet simple dish to make. It is a creamy chicken dish made from  cream sauce and vegetables. The recipe here make use of evaporated milk instead of heavy cream which some recipes are using but I think you can add all-purpose cream if you want to make it creamy. Since heavy cream is not the usual ingredient used in everyday cooking in an ordinary Filipino kitchen, and it is not usually found in supermarket, so I think evaporated milk and all-purpose cream will do the job. And with regard to the pastry used in making this dish, puff pasty is I think is the best, but to simplify this dish, you can use toasted sliced bread, cooked pasta or cooked rice. You also can be a little creative in making the pasty by using sliced bread. Use a muffin pan and press the sliced bread on it to form a cup shape. Then bake the bread until toasted and pour the mixture in the center of each muffin shaped bread. 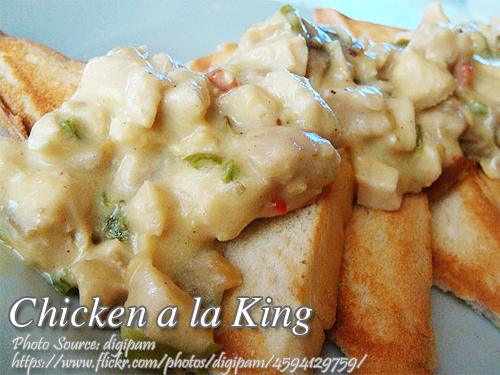 How to Make Chicken a la King

How to cook Chicken a la King: